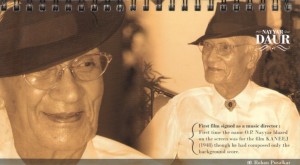 O. P. Nayyar started his career by composing the background score for the movie Kaneez (1949). Aasmaan (1952), produced by Dalsukh M. Pancholi was O.P. Nayyar’s first film as independent music director, after which he composed music for Chham Chhama Chham (1952) and Baaz (1953). Noted film producer, director and actor Guru Dutt gave him an opportunity to write, compose and conduct music and songs for several of his movies, and O.P. did not disappoint Guru Dutt. Aar Paar (1954), Mr. & Mrs. ’55 (1955), C.I.D. Shamshad Begum, Geeta Dutt, and Mohammed Rafi sang most of the earlier songs in O.P.s movies. Asha Bhosle was introduced in 1956 in the movie C.I.D. (1956). Nayyar used singers who were able to bring the romance and edgy but sweet voice and depth in their songs. Innumerable hits were produced by OP, as he was called by music lovers everywhere, and many box office hits as well. In 1957 Filmalaya introduced Nasir Hussainas a new director, and wanted someone like O.P. Nayyar to provide the romantic tunes for a new hero and heroine, i.e.Shammi Kapoor and Ameeta. OP’s songs were an amazing hit and brought him in the limelight in the next Nasir Hussain film Tumsa Nahin Dekha (1957). He composed music for Nasir Hussain again in Phir Wohi Dil Laya Hoon (1964) which had popular songs in the voices of Rafi and Asha.

Madan Mohan Kohli (25 June 1924 – 14 July 1975), better known as Madan Mohan, was a famed Hindi Film music director of the 1950s, 1960s, and 1970s. He is particularly remembered for the ghazals he composed for the film industry, mainly using the voice of Lata Mangeshkar, Talat Mahmood andMohammed Rafi.

Roshan Lal Nagrath (1917 – 1967), better known simply by his first name Roshan, is a legendary Hindi film music composer. During his career spanning 20 odd years, most notable quality of his music was the melody. He had his own style of music and never compromised with the quality of his music. Nor did he ever play to the gallery. He is especially remembered for the music which he rendered for qawwalis. 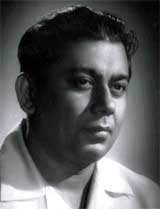 My favorites songs of Chitragupta

A career spanning about 20 years, successful hits with songs of Noor Jehan, Lata Mangeshkar and Talat Mahmood. And how many films one would compose for? Just 14! Yes, that is Sajjad Hussain for you!

He had the honor of being the only musician in the world able to play classical Indian music on the mandolin, an almost impossible task because of its limitations. Sajjad Hussain was a musical genius. However he never witnessed the glory or fame that he deserved because of his unwillingness to compromise on the smallest of details. He joined music director Pt. Hanuman Prasad (who discovered the talent in young Geeta’s voice later in 1946) as an assistant from 1941 to 1944. In 1944 he got “Dost” as an independant music director solely on the basis of his own talent. The songs of the film sung by Noor Jehan became very famous. His other musical hits were 1857 (1946), Khel (1950), Hulchal (1951) and Sangdil (1952). His last film was Rustam Sohraab (1963). Incidentally it was also the last film of singer actress Suraiya as well.

My favorites songs of RD. 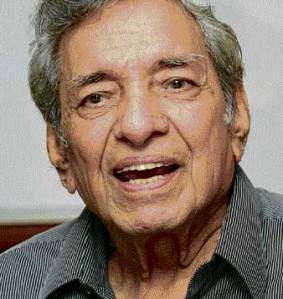